This is a continuation of my squirrel series. You can meet the other two characters by clicking on their names: Secret Agent Squirrel & Obvious Squirrel.

The Honorable Sir Humphrey Havisham came and joined us for brunch one day. It was over the summer, while we were still camping out in Alabama. We enjoyed a fine brunch of English Muffins.

Thank you for joining us Sir Humphrey. I hope we can do brunch again someday. 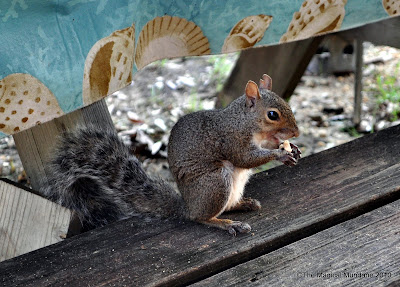 One word of advice, PLEASE do not ever treat wild squirrels as if they are pets. They can carry diseases and can be territorial and aggressive. This particular guy lives in a campground that is heavily populated year round so he was fairly used to people. Still we did not touch or try to catch him.

Also, please be aware of what you are feeding them. Do not feed them food that has animal fats, spices or sweets. Wild animals may have sensitive digestive systems. In this case, we gave him some bits of plain English muffins, no butter. 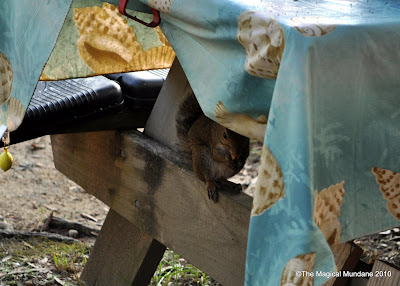 Our Sago palm hosts a number of wildlife but today's post focuses on two critters I find very interesting and entertaining.

The first is the Orchard Orbweaver spider, Leucauge venusta. This little lady has bright markings but is not dangerous to humans. She is dangerous to small insects though. 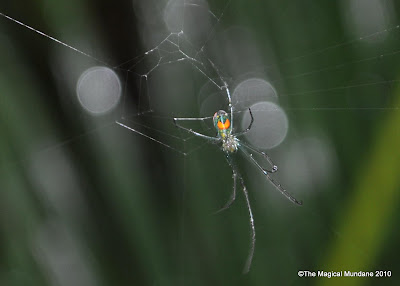 She is part of the orbweaver family and as such she makes large round webs. When you think of the classic spider web shape, that is an orbweaver. 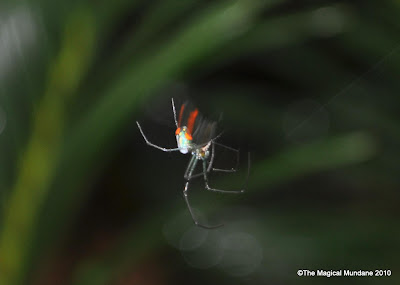 The interesting thing about Orchard Orbweavers is that they build their web in an upright position, usually at a slight angle. Then they hang out below the center, waiting for their prey to get stuck in the web. Then they pounce "GOT YOU!" 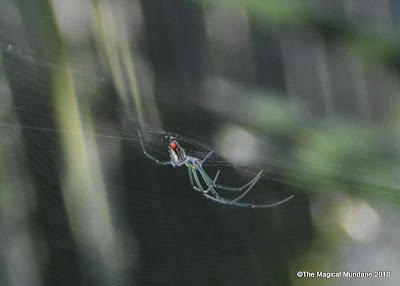 The other Sago inhabitant is the Green Anole, Anolis carolinensis, also known as Carolina Anole. The Green Anole is the only anole native to the United States. All others are escaped specimens.

Some people refer to them as Chameleons, but they are not related other than they are both lizards. It is like confusing a person with an ape. Both are primates, but we aren't even second cousins.

The confusion comes in because Green Anoles can change to brown or gray if they are in distress, ill, or as a form of camouflage. Some scientists speculate the color of the anole when in a social situation with other anoles, reflects dominance or submission. 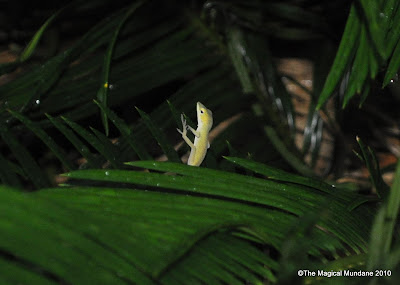 Anoles eat an assortment of small insects. Some of the prey they will devour are crickets, cockroaches and even spiders. I have a feeling that the orbweaver is safe. Maybe she tastes yucky and her orange spots warn the anoles away. Whatever the case, they seem to cohabitate without issue. 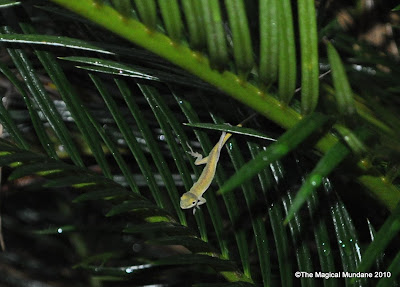 Male anoles are aggressive to one another. They may go through elaborate displays before fighting, but they will fight if necessary. Some of their displays include extending their dewlap (a bright colored fold of skin under their chin), raising the crest on their back and doing a dance that looks like push ups. 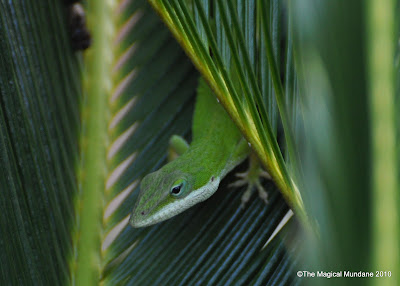 Anoles also make great pets, but you should ensure that the pet shop you go through is not selling wild caught. You run the risk of buying one that is ill or malnourished. Captive Bred would be preferable in this situation. They are used to being in an aquarium and have not had a chance to be exposed to disease. We raised anoles when I was a child and they were a lot of fun. If you would like more information on anoles as pets, I will list some websites with more information in the post script. As for me I will enjoy them in the wild on my sago palms. 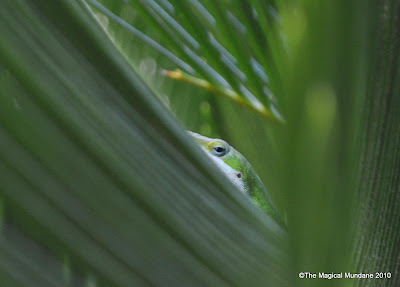 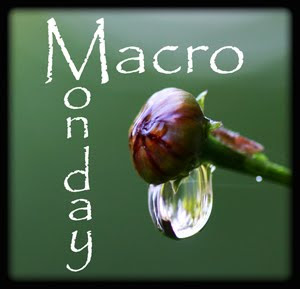 I have been so busy, I haven't had time to blog. Fear not my bloggy friends, I have not abandoned you. Let's see. We finally have at least half of our belongings unpacked and in their place, my sister came to visit with her two children, we survived my brother's "anniversary" date and we made it through Thanksgiving. Needless to say, I have a lot to share. My goal for December is to blog each and every single day, including Christmas. Do you think I will be able to do it? Only time will tell. For now, on with the blog.

These Beautyberries grow around our property in various areas. These photos are from a plant growing along the walk to the backyard gate. Specifically, these are American Beautyberries (Callicarpa americana). These berries are edible and can be made into jelly and jams. However, they should be used in moderation and processed. They can be quite tart. For a recipe on making Beautyberry Jelly, check out the blog, Life on a Southern Farm. The link will also be below in the post script. 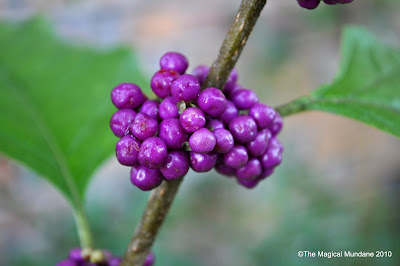 Above and beyond the berry uses, the roots and leaves were used by the Native Americans for several purposes. Teas were made from the roots to cure stomach ailments. The roots were also used in sweat baths to help with rheumatism, fevers and even malaria! If that isn't enough, the leaves were also used to keep the insects away. Science has now proven that the leaves have a compound in them that naturally keeps mosquitoes away. I think I will be planting Beautyberries all over the yard. 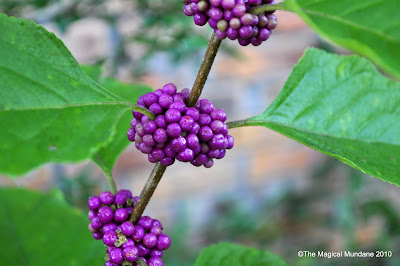 Sources of information provided above:
Plants For A Future
UT Native Plant Database
Life on a Southern Farm
US Department of Agriculture
Science Daily
Posted by Jessica at 8:14 AM 1 comment:

I hope all of you had a delightfully frightening Halloween and a Merry Samhain. For those in the southern hemisphere, a Blessed Beltane!

My little heathens went out last night for the annual trick or treating as a race car driver and dark phantom. 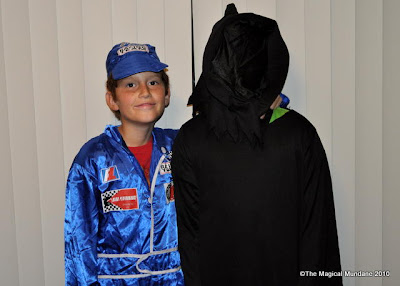 Many a spooky house we visited but none were able to scare the boys. They just reminded the ghouls and goblins to give them a treat lest they get a trick, Boo! 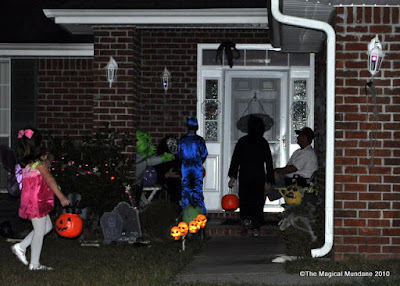 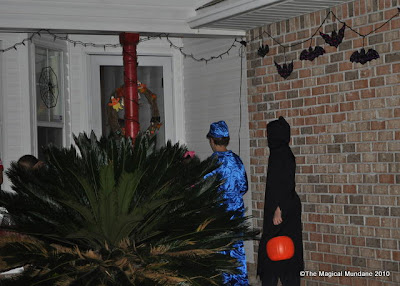 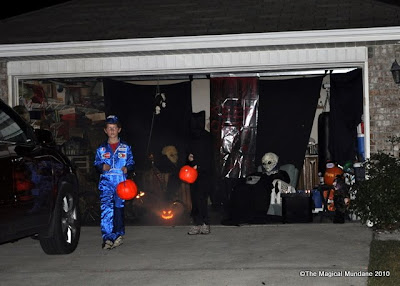 After we got home we had a lovely supper followed by dessert. Why it was the candy loot of course. 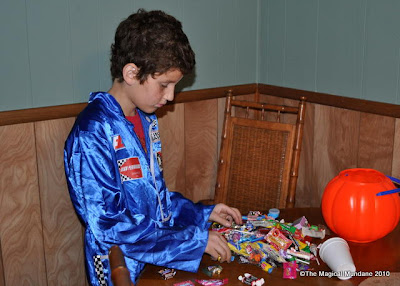 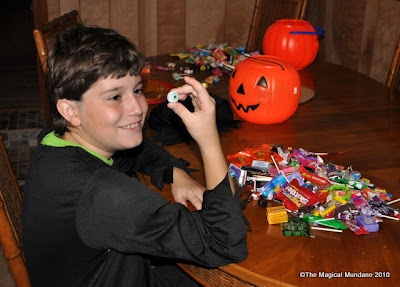