Tonight's supper plans ended up taking over three hours. No, it wasn't some fancy meal that takes hours of preparation. It was a simple pot pie using left over turkey. Unfortunately, I had several incidents. I would like to add that you shouldn't be intimidated by making pot pies from scratch. All of the issues I had were, for the most part, user issues. In other words, I was the problem. The base recipe is easy provided one is not having an off day. I am skipping all the little incidents like dropping utensils or shooting flour every where. I did have two major set backs that I will describe.

First, I used an untried recipe for the pie crust. I am not going to go into the details but it was scrapped. I still have another lump in my fridge so there may be hope yet for a different kitchen experiment. So, back to square one, I decided a quick visit to my favorite cooking blog was in order (see the post before this). Wouldn't you know it, she had a pie crust recipe. This one turned out fantastic. By now, I was well over an hour in progress, mostly due to the first crust.

My second major set back involved the sauteed onions. If there is one thing in the kitchen that I know how to do, it is sauteed onions. I make onions the same way just about every week. I love onions almost as much as I love bacon, which is a lot! How I managed to burn a stick of butter, half an onion and a clove of garlic is still beyond me. Tossing this usually yummy mix out, just about made me cry. Honestly, if I hadn't already gotten my dry ingredients together to make the roux as well as the liquids to finish my sauce I would have just gave up. But I did have it all set up so I cleaned up my pan, chopped up a new batch of onions and gave it another go. Fortunately, this attempt was perfect.

Finally, the pie was ready for the oven and it came out wonderful. My husband and kids both enjoyed it and the crust was very flaky and buttery. The filling was perfect for when you are craving warm comfort foods. I do hope you will give it a try. 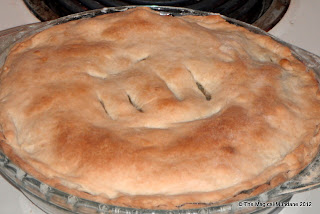 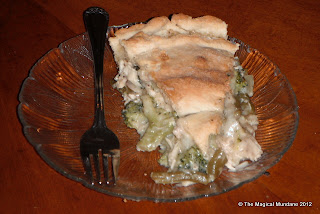 Hilah's delicious and super easy pie crust recipe is here: http://hilahcooking.com/how-to-make-pie-crust-from-scratch/ Double this up if you are making one pie. Quadruple the recipe if making two pies, as shown in my base recipe for pot pie.

The base recipe I use is here: http://allrecipes.com/recipe/dads-leftover-turkey-pot-pie/detail.aspx? I substituted veggies and the stock used. I put broccoli, cauliflower and green beans in my pie and used beef stock as that was what I had on hand. I also halved the recipe as I was only making one pie.

If any of you follow me over on the Facebook, you will realize that I have found true love... with a cooking show. Seriously, I found this fantastic channel on YouTube, which led me to the connected blog. You can watch her show on either her YouTube Channel or her website. The show is called Hilah Cooking. This is the description from her website, "I create short-form, educational, and occasionally hilarious cooking videos geared towards beginner and intermediate cooks, as well as people who are just looking for simple, low-cost recipes..." This is a fantastic description. Hilah makes even more complicated recipes easy to follow. She is entertaining and very down to earth. She is definitely not one of the haughty "professional" chefs you see on certain networks. I have watched every video from the time I found her channel & website to now, even the ones I will probably never try. Here are two of the dishes I tried for my family this week.

This is an appetizer I have never tried making. We do eat tomatoes cooked in other dishes but my family generally doesn't just pop tomatoes in our mouths. Some of us were more on the fence than others but I decided to give it a try. First, we moved down to the south and Fried Green Tomatoes are practically a staple here. If I want to give my kids a authentic Southern upbringing, we need to at least try them, right? Second, Hilah described them as tasting a bit like fried pickles, which we all love.

Here is my try at these yummy tidbits, and they were indeed yummy. I did run into a snafu with the first batch so ignore the slightly burnt ones on the bottom. If using a cast iron skillet on an electric stove, I would not heat the oil on high. Just let it take its time on medium heat and then fry. Also I cut the time on each side down to about 2 minutes but that was because my pan was too stinking hot.. 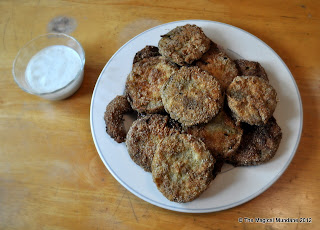 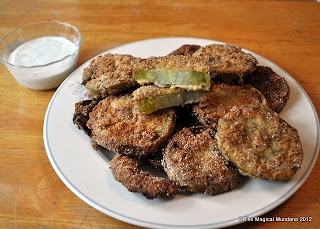 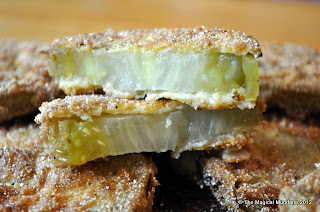 You can find the recipe and video here: http://hilahcooking.com/fried-green-tomatoes/

We have had Key Lime Pie before but this was a new recipe for us to try. Right now, Key Limes are scarce (even in Florida) so I just went ahead and used the Persians. Even though it wasn't exactly a Key Lime Pie, it still turned out delicious. I could see this recipe being converted to a number of citrusy dishes. How about lemon or mandarin orange or kumquat? Yum! 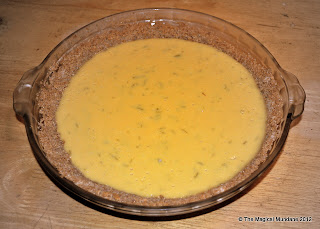 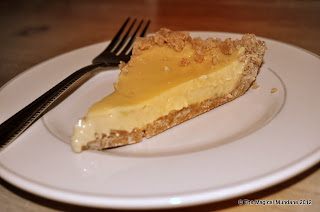 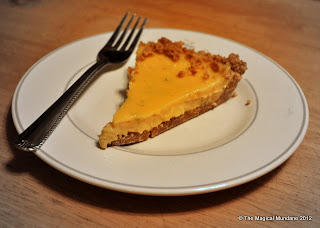 You can find the recipe and video here: http://hilahcooking.com/key-lime-pie/