The Fool and Her Journey

This post is part of an October writing challenge: Writing the Wisdom of Your Soul hosted by Lyn Thurman of the Inner Goddess Revolution. Every weekday in October, she is providing blog prompts inspired by the major arcana of tarot. The deck I am using is the Universal Fantasy Tarot. I hope you will enjoy this journey with me. Love and Blessings!

The Fool and Her Journey 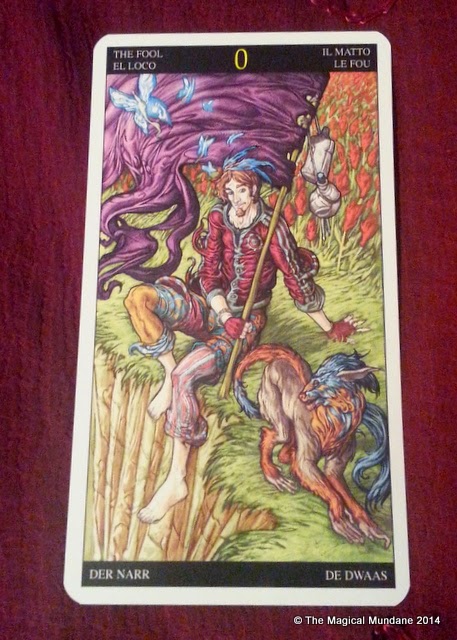 Today's prompt deals with the Fool, journeys and where you would like to go in life. Before going forward, I briefly want to touch on the past.

When I was young, I had grand plans to explore the world as an archaeologist. I wanted to be the female version of Indiana Jones. I wanted to go traipsing through the jungles in South America, poking around in ancient ruins of the peoples that came before us. I wanted to head to Egypt and excavate pyramids. I wanted to go diving and possibly discover the real Atlantis. All this came to a screeching halt when I met my husband. Adventures in foreign lands became secondary to marrying the man of my dreams and having a family. I do not regret this in any way. It has been its own grand adventure in its own right.

Over the years though the itch to travel has remained there but now it is different. Recently my husband and I were talking about what it would be like to just pack everything in storage,  head off with just enough to get by and travel the world. Maybe stay a month or two in each location. We rattled off a number of places we wanted to visit and condensed it down to a few must sees. While there were a few exoctic (for us) locations, most were related to our roots. My husband is of  German descent so Germany was at the top of  his list. I am of mostly Scottish, Irish and English descent so Scotland, Ireland and England were on my list.

It is sort of funny that when contemplating the future, we often times come back to the past. Our roots are much like the roots of a plant. They anchor us down, nurture us and are vital to the overall well being of the whole. Even if we are not consciously aware of them, they are there helping us grow upwards toward the sky at the same time as they are keeping us well grounded here on Earth.

Instead of traipsing through the jungle (which still would be fun), I am more drawn to standing on the land that my ancestors walked and breathing in the air that they breathed. Feeling my toes sink into the earth knowing that some distant relation might have done the exact same thing in the exact place hundreds of years ago. I am more drawn to picking wildflowers they might have picked, eating regional foods they might have enjoyed and listening to what the land might have whispered to them.

I have a feeling that if I was able to take this journey in the future, it would really be a journey to the past. To my roots. To the soul where memories of our ancestors are passed from one lifetime to the next. They are there just waiting for us to remember and maybe the journey to their homelands would be the key. Is it Foolish? Possibly, but I like to think that the Fool knows way more than he lets on. He is just very clever in how he gets his message across.